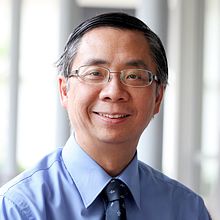 "Asian Access (A2) is committed to developing Christ-like leaders with an integrated approach with the goal of reproducing other leaders and multiplying churches. I pray that God will use Asian Access to change the few who change the many for His Kingdom as God gives the growth (1 Corinthians 3:7)."

Dr. Fung is a missionary of OMF International (formerly China Inland Mission). Dr. Fung was born in Hong Kong and had medical training in Australia. He came to faith in Christ during his time in university. Being called by God, he began to devote himself to Missions. Dr. Fung began to serve as a doctor in Hong Kong after graduation in 1982. He has also obtained the professional qualification of internal medicine in England. He received theological training in the China Graduate School of Theology and Fuller Theological Seminary. In 1989, he and his wife Dr. Jennie Cheng joined OMF International and sent by their church, began serving in a Muslim country in South Asia.

Dr. Fung became the General Director of OMF International in early December 2005, and is the first Asian to lead the ministry in the past 140 years, ever since the set up of China Inland Mission by Rev. James Hudson Taylor. Dr. Fung is responsible for pastoring and supervising more than 1400 missionaries. OMF currently serves in 14 countries in Asia, and is dedicated to preach the gospel to people in East Asia, set up churches, as well as mobilize localized church plantation movement.

Patrick was one of the speakers at the Cape Town 2010 Third Lausanne Congress on World Evangelization, and also spoke at the Keswick Bible Convention in the United Kingdom in 2011 and 2015. He served in the Urbana Student Missions Conference 2015 in the United States as one of the speakers for Bible exposition. Dr. Fung was being ordinated as Pastor in Grace (Singapore Chinese Christian) Church. He is the author of two books: "Medical Missionaries of the China Inland Mission" and "Live to Be Forgotten".

His wife, Jennie was involved in medical care for missionaries and publication of Missions resources. They have one daughter and one son.