Asian Access' presence in Japan has paralleled Japan's spectacular emergence and development as a world leader in trade, finance, and technology. The incorporation of Asian Access began in Japan in 1965, the year after Japan had hosted the summer Olympic Games. Ministry was launched in 1967. [top]

During the first fifteen years of the history of Language Institute For Evangelism, the focus was primarily on evangelism, and the staff was made up most exclusively of short-term missionaries who were teaching English conversation. Asian Access was a pioneer in the area of summer ministries. During the 70s and 80s, the ministry of Scrum Dendo (arm-in-arm evangelism) became widely-known at Christian colleges and churches all across the country. About 2,000 students participated in this pioneering summer ministry. A good number of them returned for period of one to three years to serve as year-round English teachers. They were involved in Asian Access' innovative strategy of using English conversation schools as centers for establishing new churches.

This ministry was an extremely fruitful one with thousands of students being exposed to the Gospel and many of them coming to faith in Christ. Today there are over 100 Japanese pastors, missionaries, and Christian workers who came to faith in Christ through the witness and outreach of Asian Access' English conversation centers. [top]

The second distinct phase of Asian Access' was a second fifteen-year period from 1980 to 1995. During these years there was a significant influx of career missionaries. The majority of them had originally served on Asian Access' summer program or as one-to-three-year missionaries.

The name of the mission was changed from Language Institute for Evangelism (L.I.F.E.) to LIFE Ministries. The name change reflected the fact that the Mission was involved in more than its original focus on English teaching. During this time of influx of new staff, the Mission was characterized by an entrepreneurial spirit. Many new ministries were started to serve the more than 500 churches that made up LIFE Ministries' network across the country. The new ministries reflected the interest of the missionaries and also responded to opportunities that existed to serve the church in areas such as music, worship, sports, church planting, and leadership development. It was an exciting time of growth and a fruitful time of ministry. [top]

A third phase in the work of LIFE Ministries began about 1995, when a decision was made to focus in the primary area of church multiplication and leader development. It was determined that this was the most strategic area in which the ministry could possibly be involved. It was also determined that it would most significantly maximize the relationships with more than 500 churches and national leaders that had been developed in the early years of the Mission's history.

In the early 1990s, the 20/20 Vision was articulated as the integrating vision:

With church multiplication as the singular objective of Asian Access, the most strategic means for accomplishing that vision was determined to be the selection, development and resourcing of Japan's most visionary pastors and congregations. To implement this strategy, Asian Access' leadership development program, the Japan Church Growth Institute (and later JCGI Network) was re-designed under complete Japanese leadership to take the results of fourteen years of investment in leaders and make it more widely accessible to pastors across the country. As such, Regional Training Networks were designed to be established in each of ten major regions of Japan. This ministry is now known as Asian Access/Japan and is flourishing under the leadership of a Board made up of national leaders, and this ministry has been led by former director, Rev. Hiroshi Kawasaki and now Takeshi Takazawa.

Asian Access/Japan participants are being selected and trained so that they can then become part of church multiplication networks throughout Japan. That work will be based upon Asian Access' innovative model of church planting networks that have been developed in an area in northern Japan, Yamagata.  [top]

In 1996, work was expanded outside of Japan for the first time, as the first pastor training session was launched in Mongolia. This expansion represents the fourth phase in our mission. Eleven other countries have since been added to the work since 1996, with a vision to be established in 20 countries as the Lord opens the doors.

In October 2002, the Board of Directors approved the new name Asian Access. (more about our new name...)

The name change and widened scope brought clarity to our vision and mission:

In 2015, Japan Church Growth Institute chose the new name, Asian Access/Japan. This aligned with our other countries that were already using this name (e.g., Asian Access/Cambodia, Asian Access/Mongolia, etc...). [top]

Asian Access designed a new way to recruit missionaries for Japan. go2japan was started in 2008 to leverage the power of the internet to raise awareness of the need for missionaries in Japan and to help find them. See this website here: www.go2japan.org... [top]

A Strategic Partnership for Japan [2011 – present]

In 2011, a strategic partnership uniting Asian Access and SIM USA was launched, aiming to send more church-planting missionaries to Japan. By leveraging the strengths of the two mission-sending agencies, our two organizations began maximizing effectiveness toward the goal of planting 1,000 church congregations in Japan by 2020. This has been an award-winning, innovative partnership. Read more about this strategic partnership here...  [top]

In 2014, Asian Access entered into the marketplace, taking our focus on missional outcomes that utilizes a transformational process, a vibrant learning community and an integrated curriculum to those who can shape their workplace, their community and their society. Read more about A2.business here... [top] 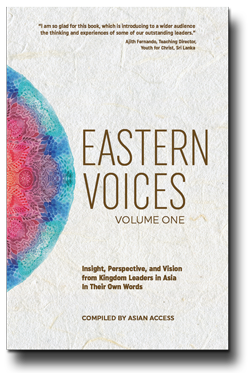 Insight, Perspective, and Vision from Kingdom Leaders in Asia In Their Own Words

Eastern Voices is a platform whereby leaders from Asia can be heard. They have much to add to the discussion. Leaders from the West can and should learn from leaders in the East.

Asian Access has been exploring invitations to bring its training model to places outside the borders of Asia and outside the boundaries of CHURCH and MARKETPLACE. So stay tuned for more updates here: https://asianaccess.org/blogcentre.