By Country
GIVE NOW!
GIVE NOW!

The 2011 triple disaster of a 9.0 earthquake, flattening tsunami waves and a nuclear meltdown galvanized the church in Japan.  Many local observers said that they had never experienced the church working together like this in their lifetime. Not only did it wake up the church internally, it also brought an international prayer and relief focus for the country that had not been seen since the end of World War II.

Traditional models and methodologies do not work in the sparsely populated disaster zone so Christian groups are cooperating with local authorities and are trying new ways to reach a beleaguered citizenry using a more holistic approach.

There are smatterings of “newness” in the way that Christians “do church” and also in the way that a biblical witness is propagated in Japan. Many innovative strategies are being attempted to reach the Japanese in a more contextual manner. Urban church plants are being started in downtown Tokyo and other large and mid-sized cities; organic church and lay-led Japanese house and cell church planting are becoming increasingly common; prayer, evangelism and discipleship groups via Skype have been used creatively when distance or expense prevents frequent face-to-face contact; and various church and mission groups are cooperating together to foster multiplication and lay-led movements that will start not one but many church plants in a given local area, even throughout the country. (adapted from East Asian Peoples with Emphasis on the Japanese. Gary Fujino)

The 9.0 Earthquake followed immediately by a 90 ft high tsunami moving faster than the speed of a bullet train triggered the worst civilian nuclear disaster in Japan’s history. The devastation has been nothing short of breathtaking. 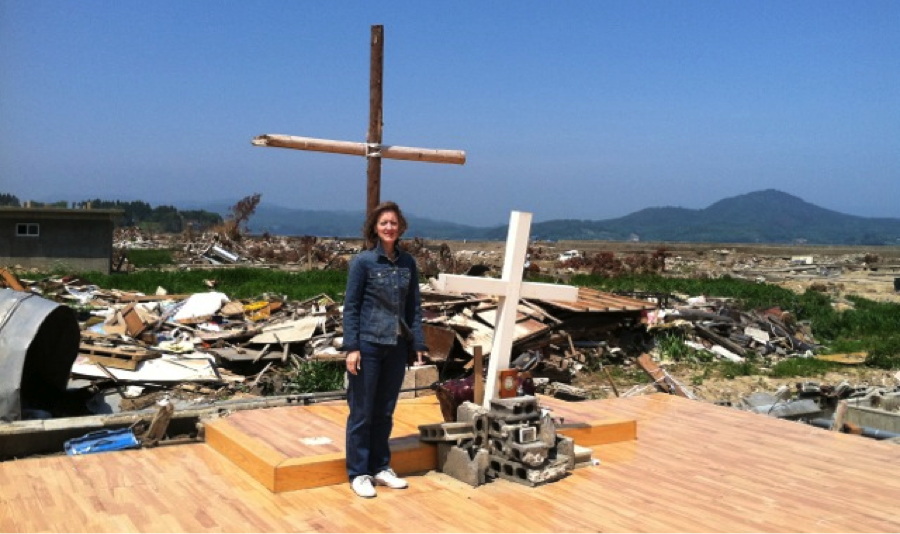 Mary Jo Wilson, Asian Access VP for Japan, stands on what is left of Seaside Bible Church in 2011 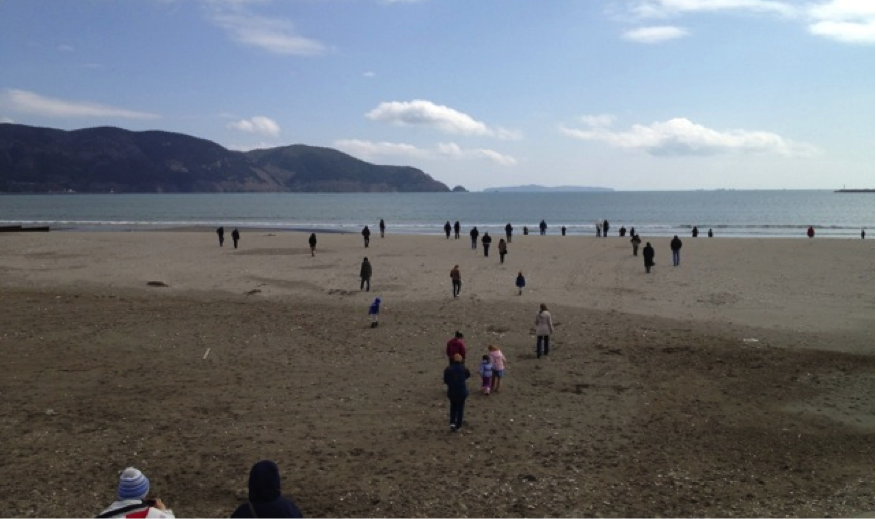 Christians in Ishinomaki, once a busy fishing town on the east coast, walk the beach and pray for and with bereaved local residents on the first anniversary

Neighborhoods have been destroyed. Some houses could be repaired. Many had to be replaced. In some locations churches that lost members to the tsunami provide relief to local residents and in some cases the residents started saying things like, “Today Jesus brought us food” or “Today I got a bottle of water from Jesus.” Such incarnational witness in shared hardship has opened hearts to Christ. Some whose community was destroyed in the disasters are finding Christian community.

Many need jobs and many of those do not have companies or fisheries to return to. Industries are being created even as some old ones are being restored; coastline fisheries that were devastated are being re-constituted.

Residents say things like, “Many organizations and their volunteers have left, but the Christians are still here.” Trust in Government is very low. People have little expectation that they will get significant help from government aid.

Asian Access (A2) leadership has completed the placement of seven units (five families and two single missionaries) in Miyagi prefecture in Tohoku.  Each missionary is settling into their respective role and focusing on disciple making alongside their Japanese partners.  All have some connection to relief efforts, adapting to the changing needs, and most are working toward planting a new church.  We hope to see six new churches established through these partnerships, and pave the way toward multiplying churches across Miyagi and beyond.

Such as has been previously heard of from repressive Islamic countries, there are several reports of signs and wonders; dreams and visions of Jesus. On the other hand, some residents have seen what they thought were the glowing faces of their deceased loved ones under bridges and other dark places. They were terrified supposing they were being haunted by disgruntled spirits. They talked with some Asian Access missionaries who prayed for them and they no longer see the troubling spirits. This is something not often taught in seminaries but being encountered in Tohoku, Japan and giving Christian workers there an opportunity to demonstrate the love, compassion, and power of Christ in a highly contextualized, relevant way.

The holistic ministry approach of Christ’s emissaries in the region has removed many traditional stumbling blocks to faith through demonstrations of practical compassion.

Pastor Matsuda in Rifu, after reflecting on the disaster and response, realized that what was most needed was leadership, even more than relief aid.  Pray that God will raise up leaders who serve well in communities that are rebuilding.

The disasters have given opportunities for younger Christian leaders to be raised up, identified, and released. Right after the disasters, much heavy work was needed in relief and rescue operations. While most pastors in Japan are in their 70’s, these older leaders were not in a position to engage with the physical work. As needs have changed, there is more of a broad-based response with older established leaders working closely with recently identified and released younger leaders. A number of older or even pastors in their prime in a number of locations have profited from input and perspectives from younger leaders to try innovative operations of compassion. In some cases very non-traditional ecclesia have been birthed (e.g.“Sola” in Ishinomaki started by a group from Pastor Yonai’s church in Kokubunji, Tokyo).

Prayer is needed for the small spiritual harvest gleaned so far to grow and multiply establishing the gospel seed in the culture before the door of opportunity created by the so-called “utopia effect” closes and Tohoku once again becomes impervious to the gospel. Christians need to work diligently as “God-cooperators” to take advantage of every opportunity to cultivate, scatter seed, nurture, water, and harvest while God keeps the door open.

There have been reports from other regions of Japan that many people far away from Tohoku have a heightened sense of anticipation or even spiritual sensitivity as a result of the triple disaster of March 2011.