Brachiate... A word worth living! 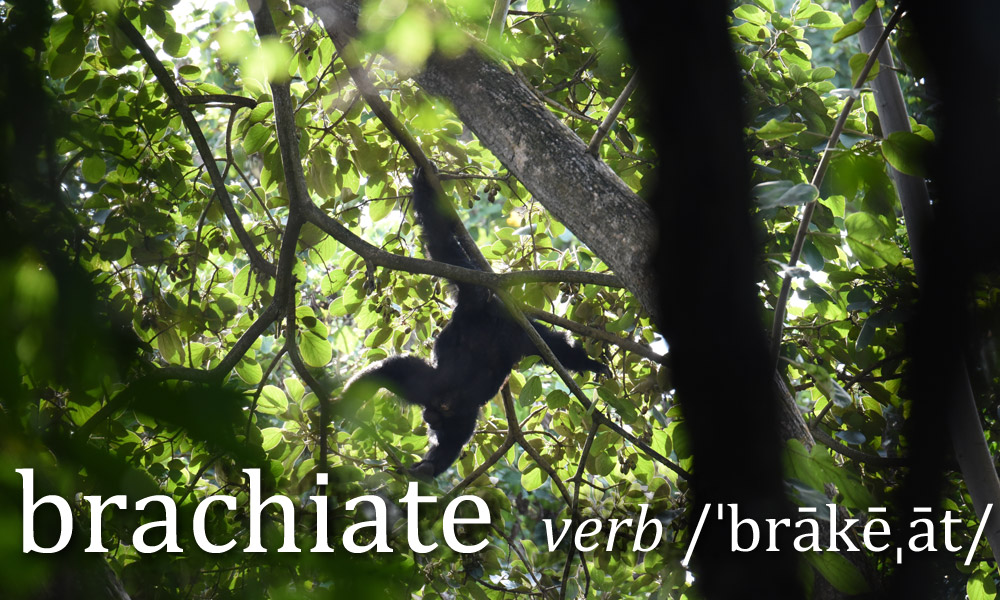 During a recent conversation with a friend of mine, he mentioned a word I had not heard before... brachiate. He suggested I search it out on google when I returned home. He said it is a word worth discovering... and even more important, a word worth living. I did as he said and discovered the following:

BRACHIATE: comes from the Latin BRACHIUM, discovered in the mid eighteenth century and means “arm” or “arm swinging”. The verb means to swing by the arms from one hold (branch or tree limb) to the next and one of its uses is for smaller monkeys that proceed through the jungle by swinging from one hold to the next.

I began to think of other possibilities and thought of the monkey bars we used in junior school or the trapeze artists soaring through the air in a circus. To the monkeys in the jungle, brachiating has a degree of risk as they swing from one tree limb to another. For there are moments where they need to let go of the security of one branch to launch out hoping that there is another branch for them to grasp.

And that’s when the reality of living the Christian life came home to me with fresh perspective. For following the Lord has a lot to do with brachiating. Let me give you a few examples :

The Lord said to Abram, “Leave your country, your people and your father’s household and go to the land I will show you,” Genesis 12:1. Notice, Abram had to leave that which was familiar to him to go to that which was at the time unknown. He was being asked to brachiate.

“So they pulled their boats up on shore, left everything and followed him.” Luke 5:11

All Peter and John had was a call to follow Jesus, not knowing where it would take them, what it would involve or how their needs would be met. They were being asked to brachiate.

Now and angel of the Lord said to Philip, “Go south to the road – the desert road – that goes from Jerusalem to Gaza.” Acts 8:26. Philip was leading an amazing evangelistic outreach in a city in Samaria (Acts 8:4-8) and was instructed to leave it all and head for the desert, not knowing what was going to happen next. He was being asked to brachiate.

‘Some time later the brook dried up because there had been no rain in the land. Then the word of the Lord came to him: “Go at once to Zarephath in the region of Sidon and stay there. I have instructed a widow there to supply you with food.” ’ 1 Kings 17:7-8

What was Elijah required to do when he heard the words, “the brook has dried up”? He was asked to do something quite illogical that required a great step of faith. The widow who was to provide him with food was in fact poor and incapable of feeding herself, let alone Elijah. He was being asked to brachiate.

Modern management theory would advise us to examine our options which for Elijah might have been:

a.) Do nothing and hope for the best which would be the equivalent of watching your church gradually die and close down.

b.) Take some human initiative like drilling for water or applying for a grant of money which might require a church to compromise its convictions and calling.

c.) Revert to the traditions of the past and build monuments to the ravens (the good old days) and not accept the fact that God has moved on. Elijah was being asked to brachiate.

As I read the scriptures, I have come to the conclusion that the practice of brachiating is quite common for those who would wholeheartedly follow their Lord. In fact, as long as we follow the Lord, we will continually be asked to step out and brachiate.

So what can we learn about brachiating from Abram and Peter and John and Philip and Elijah and others who have been used greatly by God?

How about you? Are you living a life of brachiating? It is a word worth living. Has the Lord been speaking to you like He has spoken to so many people in the scriptures in the past, and down through church history and is still doing so today?