I was addressing a group of leaders, the first cohort in a country where Asian Access was beginning a new program. My goal? Explain why Asian Access takes an approach to leader development that runs counter to everything else these leaders have experienced.

Throughout Asia, one of the consistent realities for the lives of the leaders we work with is the fast, even frenetic, paces of their lives. These leaders, all established pastors as well as ministry and often civic leaders in their communities, live and minister at breakneck speeds. They usually wear several hats, juggle responsibilities with numerous boards and organizations in addition to their home churches, and are usually meeting themselves coming and going.

To add to the pace, there is pressure to be very busy. “We have a saying here in our country,” a ministry leader once told me: “ACCELERATE!” There is even some ego pressure involved. A leader in one of our veteran countries admitted to me privately that the busier a leader is seen to be, the more importantly he or she is regarded.

All of which means, when our leaders first engage Asian Access, it can be a bit, well, arresting. “Where’s the manual?” one leader queried me upon his arrival to his cohort’s first module. “We don’t have a manual,” I replied. “Well, what’s the curriculum? What am I supposed to learn that I will then teach everyone else?”

“Actually, we don’t have a curriculum either,” I again replied. “While we have a number of topics we recommend that you cover, a ‘set’ curriculum is not how Asian Access works.” “Well then,” this leader rejoined (who was accustomed to content-heavy, short-term seminars taught out of thick manuals), “what are we doing here?”

That is where small and slow comes in.

Asian Access arose to address acute needs in the pastoral and leadership communities. We saw that the isolation of leadership, the frantic pace, and the outsized expectations placed upon leaders resulted in stress overload, family collapse, and early burnout. Early on, Asian Access realized that these leaders were in dire need of deep, lasting transformation and restoration in their spiritual, personal, and ministry lives. Just as early on, we realized that there is one way to achieve this kind of transformation:

Life-on-life discipleship, done in small groups, through the learning-community model, patiently, over time.

Thus, a program where groups of 12 – 18 leaders at a time spend two years together, meeting eight times for intensive four-day modules of interaction, relationship-building, prayer, study, and building for the future. It’s small; but then again, it’s slow. But most importantly, it is what works. We have learned that there are no shortcuts to deep, sustainable transformation.

Running Counter to the Cultural DNA

As Asian Access’ small and slow approach runs counter to the cultural DNA in our countries, it usually takes at least a year for the “small and slow” ethos to sink in. “We’re just starting to develop community,” one key leader said at the beginning of the second year, as he looked around to his fellow cohort members. “It’s not easy, is it?” he smiled. There were affirming laughs, chuckles and nods throughout the room.

Thanks be to God, over time, the leaders not only adjust to the small-group interaction and slower pace, they come to embrace it. The same cohort that looked at me cross-eyed when I first shared our approach eventually took on “We’re small, but we’re slow” as their mantra. They have since passed it along to the second cohort, and it is becoming an identifier for them of what makes Asian Access distinctive. 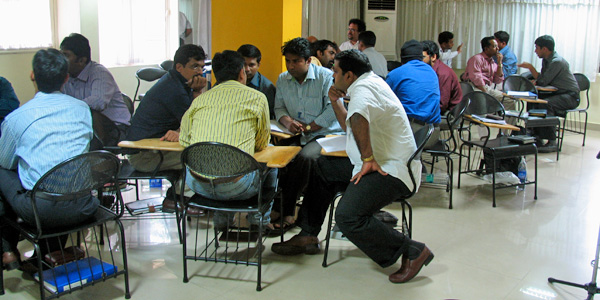 Small and slow may not be for everyone. We understand why some might approach leader development differently. But we have found it to be God’s way for Asian Access—enabling us to transform and restore the lives of hundreds of key leaders, energizing and inspiring them to decades of strong, fruitful ministry while rekindling their love for God and healing their family relationships.

Thank you for your friendship, prayers, and financial support for “small and slow” transformational leader development. See you at the finish line…eventually!

Noel Becchetti has been serving as Asian Access' VP for Leader Development since 2012. Noel and his wife Kyle are currently residing in El Cajon, California, where they will likely be for some time while they stay connected to their families, friends, and Asian Access colleagues through Zoom.