The Power of Yeast:

Did Jesus really mean what He said? 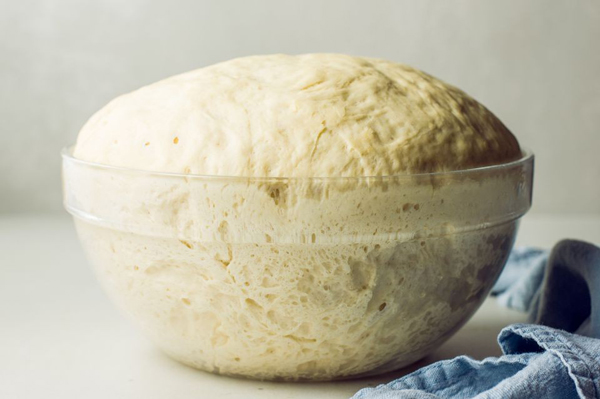 The Church of Jesus Christ is the most powerful body in the world today. It is the group of people that Satan fears most. Consequently, one of Satan’s main assignments is to suppress this truth so that the church will never find out about it, and start living it out in the power and authority of the Holy Spirit that Jesus promised His disciples.

Occasionally, there is a person who takes this truth seriously and in the process discovers the reality of Jesus’ words, “The Kingdom of Heaven is like yeast that a woman took and mixed into about 60 pounds (27 kilograms) of flour until it worked ALL THE WAY THROUGH THE DOUGH.” (Matthew 13:33)

One such person is Maxine who started coming to my church with her husband Mark and two daughters in 1996. One day I asked Maxine a question I love to ask people; “If you could do for God whatever you would love to do, and you knew you wouldn’t fail, what is it you would do? Maxine responded by telling me about her love for children and soon after joined the leadership team of our Children’s Church. She immediately had an impact on our children and the following year I appointed her as the leader of the department.

She immediately began a training program for the leadership team and it wasn’t long before the team, dressed in their conspicuous jeans and red t shirts, were arriving an hour before church began to set up and pray and then move to the foyer to greet the children as they arrived. It was like a big reunion every Sunday. The teachers were each assigned a group of children to disciple and follow up and it wasn’t a surprise to see the Children’s church start to come alive and grow. 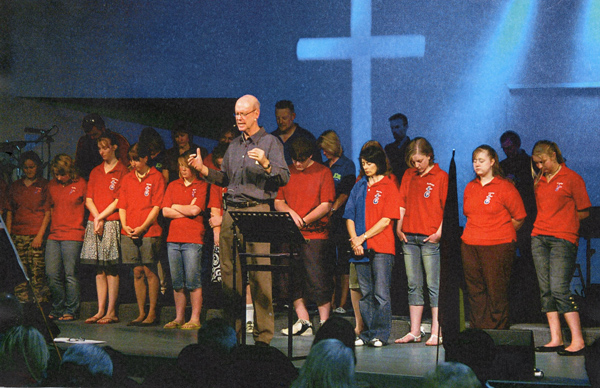 The yeast was at work! (Maxine is pictured fourth person from the right)

The following year Maxine began Holiday Bible Clubs for the community for a week in January and in July and some 200 children attended. Then followed a Kid’s Night Out program on Friday nights, a Kid’s Mentoring program for children with social problems in a nearby school, and then a food and clothing program for needy families.

But there was more. Maxine had a vision of reaching the children in our local government area and started contacting the principals of our surrounding schools asking if she could come to their school with a team of volunteers to present a 50 minute Christmas production about Jesus. And within a few years she was presenting the productions to 2,600 children in 10 schools over a period of 2 weeks with up to 5 productions a day. Maxine believed what Jesus said could actually happen, that of being the yeast of the kingdom that could penetrate and influence the dough of the children in the schools in our local community.

Her statistics over 18 years are quite amazing for an ordinary person who made herself available to God so that He might use her in an extraordinary way.

Jesus said, “The Kingdom of heaven is like yeast that a woman took and mixed into about 60 pounds (27 kilograms) of flour UNTIL IT WORKED ALL THROUGH THE DOUGH.”

A small amount of yeast is made up of properties that are at work in the fermentation of the dough and 2.5 kilograms of baker’s yeast contains 2.5 billion yeast cells. From this illustration and Maxine’s ministry we learnt that yeast:

I have a conviction that in critical times such as we live in today, we are going to see a multiplication of “yeast stories” being birthed around the world in many shapes and forms. The following are some examples:

2. “NO PLACE LEFT is an international coalition of practitioners, churches and ministries committed to multiplying disciples and streams of reproducing churches around the world. Participation is simple: obey the Great Commission. The name was inspired by Paul’s statement that there was ‘no place left’ for him in the eastern half of the Roman Empire. (Romans 15:23) Paul had completed his task by establishing streams of reproducing churches. He was ready to move on to Rome, then to Spain to begin the campaign to reach the western half of the empire.” (From Steve Addison’s recently released book The Rise and Fall of Movements)

3. TRANSFORMING OUR WORLD is a movement that is taking the church into the marketplace (the heart of a nation) that has already been redeemed by Jesus and now needs to be reclaimed and transformed by His followers. In his book, Ekklesia, Ed Silvoso shares how the Transforming Our World networks are rediscovering God’s instrument for global transformation in schools, companies, prisons, cities and even nations.

4. One of the great yeast leaders of our time has been Reinhard Bonnke and his ministry CHRIST FOR ALL NATIONS. He arrived in Africa in 1969 and had a vision from God to see a continent washed in the blood of Jesus and a goal to see 100 million souls saved. That is a yeast goal. His first crusade was conducted in Botswana where 100 people attended. His ministry soon multiplied with crowds of up to 1,600,000 people attending a single meeting. Upon his recent death, his ministry had recorded 78,800,704 salvation decisions, and still counting. He was quoted as saying, “If you are doing nothing, God doesn’t need to give you any help to do nothing. Go out and do something impossible for Jesus and then God will help you.”

What can we learn from the Power of Yeast? Surely it is that God takes ordinary people:

ABOUT THE AUTHOR: Rod Denton has served as a pastor and as a teacher in the development of emerging leaders in Australia and 9 different countries across Asia with Asian Access. He now serves as a consultant for Rod Denton Equipping The Next Generation. Rod also serves part-time as the Mission's Resource Consultant with the Salvation Army.