Congratulations on finishing kindergarten! Here are are 5 toothbrushes.

Well, Day 5 for me is winding down. Not a terribly exciting day for me, but my heart is tired. 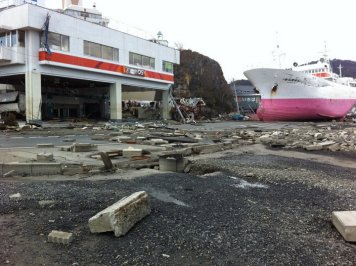 A ship was washed up on shore.

This morning we drove about 3 hours north of Sendai to the city of Kesennuma. We had heard that the evacuation centers were short on supplies such as toothbrushes and other hygiene items.

This time the reports were true, and no one had yet brought anything. Our van load, even with the extra load on the roof rack, wasn’t enough, but it was a good start, and the folks working there were very encouraged to know that someone cared and that more were coming.

We told them we were a group of Christian volunteers who had come from various parts of the country to help, because we cared about the people in the affected areas. We also told them that many Christians, in Japan, in America, and all over the world, were praying for them.

I had a chance to talk a bit longer with one of the ladies working there, and was able to encourage her a little more. She seemed so genuinely grateful that someone cared enough to come, to help, to listen.

I assured her that the God we Christians worship – the God who created heaven and earth – really hears and answers our prayers, and that we would definitely be praying. 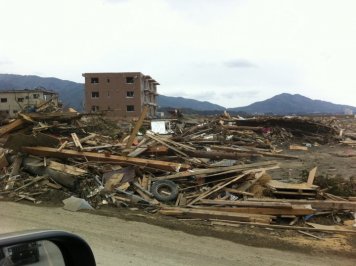 From there we drove further north toward Ofunato. Along the way we passed some of the very hardest hit areas. That was kind of hard. An entire little valley, a whole community, was crushed like a handful of crackers and the pieces were strewn across the valley. Wood, concrete, steel, furniture, cars, everything – destroyed beyond recognition, mixed together, and scattered everywhere.

Then there was the family, a mom and 3 children, looking through the wreckage where their house once stood, looking for anything belonging to them that they could salvage.

I was able to talk with the woman, much as I had spoken at the evacuation center. She, too, seemed really thankful for my stopping to talk with her.

In Ofunato we visited a church and made contact with the pastor there. They were fine but their sister church’s building was destroyed, and about half of the members are unaccounted for.

The third church we visited also runs a kindergarten, and they asked if we could get them supplies to give each of the for 90 children for their graduation on Saturday. A hygiene kit is a strange present to give as a graduation present, but then this is a strange time. Imagine:

"Congratulations on finishing kindergarten! Here are are 5 toothbrushes, 3 razors, and some soap." 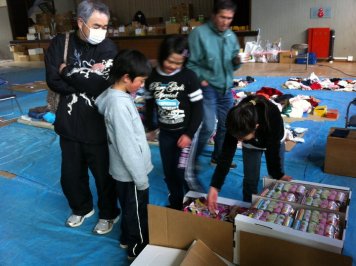 Picking through supplies at a relief center.

Our last stop was the evacuation center where some of the journalists with us had stayed to get stories. There I ran into an elderly man who invited me to sit by him and we talked. His house and the entire surrounding neighborhood had been washed away by the tsunami, but his family were all safe. He hopes to rebuild on the site where his house was, and live there again.

The best part of the day was having those conversations, short though they all were. I wished I’d had more time each time, to listen longer and share more.

The hardest part was seeing all the destruction firsthand. It made nearing people’s stories come alive that much more. It one’s heart heavy, hearing about what they’ve been through and feeling genuine concern for them. It makes your heart heavy to drive along the picturesque coastline and then see community after community utterly destroyed. Clothes hanging 30 feet up in the trees where the wave left them. Immense piles of scrap wood that were once houses. Cars crushed under the hulls of boats, both lying in the street next to a blown out storefront. Piles of debris higher than the roof of the car lining both sides of the road all the way through the center of town.

The only time I cried was when I was sitting in the car, trying to understand the request for supplies the evacuation center had given us. I wondered, "Why are they asking for rubber boots and backpacks?" Then I realized… they wanted to walk back down the hill through the wreckage to search for their belongings, anything they could find that had not been destroyed. When I thought about what that must be like…

Thank you, if you’ve read this far, for listing to what I guess is turning into something like a journal for me. Thank you for praying. Please ask that the Lord would use us here to make a significant difference in the lives of the Japanese living here.

Yours in Christ,
Kent Muhling