I am a little embarrassed to admit it, but when I was in high school my friends and I would plan how to find boyfriends in time for Christmas. We never really succeeded. I laugh about it now but at that time we were very serious about who to spend the holiday with and how we might find him.

We weren't alone! Every year in the fall when Christmas begins to appear, young people throughout Japan start searching for a boyfriend or girlfriend. Even in this Buddhist and Shinto nation, Christmas atmosphere can be found everywhere, and earlier each year. Department stores play Christmas music; convenience stores advertise fancy Christmas cakes. Colonel Sanders puts on a Santa hat and sells Christmas chicken. It's a season for feeling うきうき (uki uki), cheerful and merry.

Throughout my youth and early twenties that's how I spent every holiday season, looking for a boyfriend—and as an unwelcome but necessary alternative, making party plans with friends. That was all I knew to do.

But then, in 2001, I was finally able to truly celebrate. That spring I had gone to church for the first time through the witness of my sister, Yuko. I believed much more quickly than many Japanese, and got baptized that September, at age 27. The holiday season became so much more meaningful. On Christmas Eve I got to celebrate the real meaning of the season for the very first time. My heart was full as I sang carols with friends.

Even now I remember that huge difference. I returned home that night with deep peace, not with unsatisfied hope that we are left with when we seek happiness in the world's ways.

Now every holiday season I wonder how many of my friends know the real meaning of Christmas. There are parties here and there, but people don't really know what to celebrate. What does God think of this, I wonder.

Luke 2:14 says, "Glory to God in the highest heaven, and on earth peace among those whom he favors!"

I pray that during this Christmas season many more Japanese people will learn the true meaning of the season, that they will find true peace through the One whose birth we celebrate. 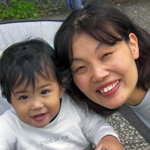