Are relief funds getting to the people in Nepal?

In an article entitled "Nepal Earthquake 2015 - Petition to Transparency International, CIAA Nepal and United Nations," Sanju Lama levies pretty harsh allegations of corruption in Nepal that have kept relief funds and supplies from the quake victims. 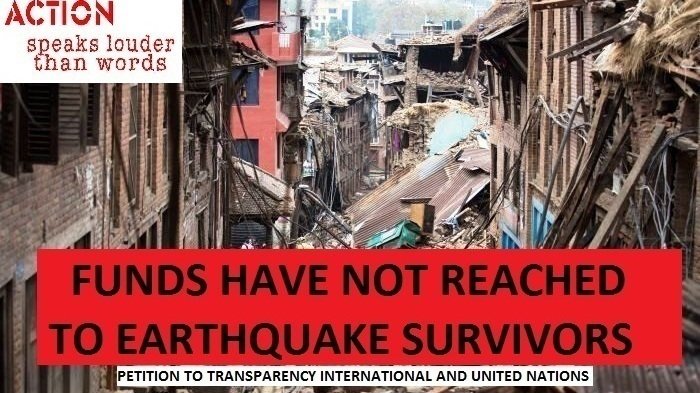 Following the initial devastating 7.8 magnitude earthquake on 25-April-2015 and the 7.3 aftershock on 12-May, bureaucracy and corruption severely hampered the distribution of aid. She writes,

It has been reported that the government of Nepal has received funds and pledges of Billions of Nepalese Rupees from countries all over the world (Wikipedia article; Financial Tracking Service report). The generosity has been overwhelming, but most of these funds have not reached to people who are in desperate need of it, due to ongoing corruption and bribery which is deeply rooted inside the political system of Nepal.

"Most people have not even received the basic needs like tents and food supplies which does not tie up with the billions collected so far by the government. It is as simple as that. Committing to transparency and actually implementing it are two different things."

At this time of adversity, everyone is helping out each other in their own ways and the work of volunteers, NGOs, INGOs, Armies and civilians have been commendable. We would still need lot more funding and aids to get back to normalcy so please carry on donating to credible organisations and groups. Every little helps.)

This is precisely why it is recommended to give through NGOs, who have delivery systems on the ground. Asian Access is delivering aid directly through a network of local churches right to quake victims.

In fact, Asian Access has been distributing funds since June through dozens of local churches that have a pulse on where the greatest needs are. Due to the enormous homelessness, A2 is currently raising funds for Family Rebuilding Packages, which can get directly to homeless family with in a matter of a couple weeks. Each package is only $130 and includes:

Would you consider giving $130 to help a homeless family get back on its feet?

After this Family Rebuidling Package campaign, Asian Access will continue distributing funds through local churches that have the flexibility to get relief to the victims who need it the most.

We can't speak for all groups, but we can say with integrity that relief funds donated to Asian Access are getting directly to the people of Nepal.

Related articles on inefficiency and corruption: