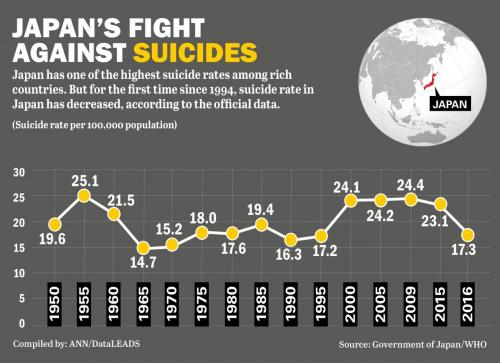 It is well known that Japan has one of the highest suicide rates in the world. Fortunately, the numbers have been declining in recent years as can be seen from this graph.

That said, many days I ride the trains in Tokyo and a delay occurs because of “an accident”. It’s so sad to see. And, it’s a complicated situation as culturally many Japanese see suicide as a way to retain honor for one’s nation or family as in the case of war before being overtaken by an enemy or by saving your family from the shame of losing your job, and so on.

Yesterday, this all became much more vivid to me as the train I was on had another “accident”, literally right under my train car. At a station just a few stops from where I was to have a meeting, our train was stopped for over an hour as they retrieved the person from under the train and cleaned up the remains left behind.

It really hit home for me as I waited there locked in the train all that time. For a while, they had to turn the air conditioning and lights out to crawl under all the trains to retrieve the body. There were swarms of firefighters and police officers helping and the dignity they show in taking the body away is impressive. They must have had 12 officers on either side of the stretcher holding up a tarp so that no one would see the person.

Hopelessness, But a God Who Cares

Sadness overwhelmed me throughout, and I began praying earnestly for the people of Japan that hope would come their way.

I serve Christ who promises to carry all our burdens, no matter how challenging and how deep the pain and shame. I pray that Jesus’ presence would so fill Japan that many would come to know the hope that he has to offer.

And, for those of you suffering from depression, pain or shame, be sure to reach out to someone and share what you are going through. Jesus is there for you and your friends and family want the best for you. We’re here to help and Jesus cares!

Cast all your anxiety on him because he cares for you.
– 1 Peter 5:7

Please pray for Japan, that the hope of Christ will permeate this land. And pray for us as we seek to “Change the Few who Change the Many.” May Asian Access and all those who represent Christ be able to reach these precious souls who are lost, “like sheep without a shepherd”. Pray to the Lord of the harvest to send out workers to be the presence of Jesus in the midst of the pain and shame!