Asia (MNN) — Believers in East Asia are planning something big. More than 900 pastors and church leaders from their country recently gathered to discuss the largest missionary-sending initiative in the nation’s history.

Over the next 15 years, this restricted-access country hopes to send 20,000 missionaries to some of the least-reached people groups in the world.

“[The country] did a survey of how many missionaries God had sent to their country over the last 200 years, and they realized it’s about 20,000 missionaries who brought the hope of Christ to their country,” says Joe Handley, president of Asian Access, a ministry dedicated to raising up Christian leaders within the continent.

“As they reflected deeper and prayed, they had a sense that they owe it back to God to be a blessing to the nations that have yet to see this hope.”

The idea behind the initiative isn’t new. In its early days, it was known as the Back to Jerusalem movement, a Buddhist, Hindu, and Muslim outreach initiative. However, this movement sat dormant for many years and never fully got off the ground.

It wasn’t until around 2011 when the nation’s idea of paying back this “spiritual debt” began to gain momentum, beginning through a gathering of Christians in Korea, which Asian Access attended.

The vision kept growing. Last year, 30 of the top Christian leaders from the country gathered to pray for their 2030 vision: to send 20,000 missionaries from their country to nations with little Gospel influence. They met again last month, this time with 900 pastors and church leaders, to discuss ways they can collaborate to accomplish their goal.

“For years, this church in this country has been sending missionaries, but it’s not been effective,” Handley says.

“Many of them have come home discouraged, not supported. Now, they’re poised and looking for groups like Asian Access and many others that are coming alongside to help build capacity for a local indigenous sending movement.

“This is really stunning, because it’s not foreign agencies that are running this thing. It’s not actually groups like Asian Access, although we’re involved. It’s really local, indigenous expressions of mission societies and churches that are going to be at the forefront of this sending engine.”

Although support from groups like Asian Access is vital, the indigenous missionaries are in a unique position to make a difference. Their personal life experiences and nationality allow them to impact people in a way that many Western missionaries could not.

“They are a church that has faced persecution,” Handley says. “They have been living through it for decades. I personally know pastors that have spent many years in jail, many years under torture or oppression, many years under all sorts of different kinds of pressure, and so they’ve already been tested and tried. They have something that generally the Western church has not faced at all, in terms of the pressures that have been put on them. 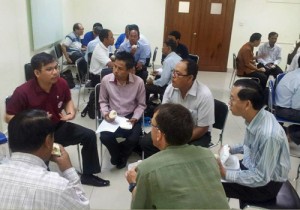 You might not be able to personally impact persecuted believers, but you can always help those who can. Handley asks that you pray for believers in this country as they foster their missionary-sending vision, as well as for groups like Asian Access supporting them.

“I would say the key prayer point right now is praying for the capacity building of these nations, whether it’s in collaboration, leadership development, or setting up sending structures, having a church that can support from behind,” Handley says.

Financial resources are also a necessity. Handley estimates that this initiative is a multi-million dollar effort. Click here for ways to give.

Listen to the broadcast (story starts at 1:57)