CHINA/HONG KONG (MNN) — The politics of mainland China’s relationship with Hong Kong have never been simple, but new regulations have just made things even more complicated. According to Joe Handley of Asian Access, thousands of young people in Hong Kong have been protesting a new extradition law.

“That extradition law allows anybody who’s being prosecuted in Hong Kong to be taken to mainland China for their prosecution,” Handley says. “That means they won’t be prosecuted here in the courts of Hong Kong, they’ll actually be taken to mainland China under their jurisdiction rather than the type of jurisdiction they’re used to here in Hong Kong territory.”

Young people are especially concerned about the standards of freedom this will set for Hong Kong residents.

“The momentum of the young people and those who are concerned is growing and rising,” Handley says. “That caused the Hong Kong government here to back off, at least temporarily, on this extradition law. They pulled it from moving forward, but for right now, it’s just a delay. And so, the protests go on.”

Delays aren’t good enough for protestors; they want the law to be done away with altogether. But so far, that doesn’t seem to be the government’s plan. 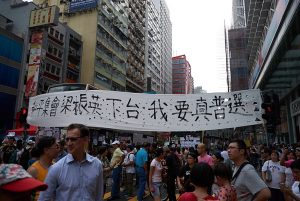 “The government has apologized and they have gone before the people and said we apologize for moving this forward, but they have not fully retracted the bill for future review.”

But this isn’t just a political conversation. Protestors have adopted the 1974 hymn “Sing Hallelujah to the Lord” as their anthem, and that’s not where Christian influence on the issue ends.

“That doesn’t mean that Christians in general align with the protesters in full,” Handley explains. “Actually, people I’ve met this week are on both sides of the issue. I’ve met those that are strongly supportive of the protesters, I’ve met those who are really in support predominantly of the police, and [I’ve met] a lot of people that are sort of just more in favor of peace in general and don’t want rioting and those types of things to take place.”

The influential presence of Christians explains the use of hymns, but Asian Access says their contacts are more concerned with maintaining peace than politics.

“We were at several churches this week, and one of which made an announcement publicly that said, ‘We have people in our church that are police officers, government officials, and we also have people in our church that are protesters. And we’re not here to take a side, we’re just here to pray for peace, in the midst of the situation with what’s going on. We want to be the light of Christ in the midst of all the, you know, challenge and turmoil.’”

Those advocates for peace are trying to bridge the gap between police and protestors, “becoming a voice of reason and a voice of peace and calm in the midst of the storm.”

And so far, it seems to be working.

“One of our colleagues with Asian Access said that… the leadership of the church is standing in the gap and trying to provide a bridge to illustrate the ideal of the Prince of Peace, that Jesus is here to bring calm to the storms of life,” Handley says. “When these songs started to get sung on the streets and when these believers were standing in the presence in the gap to bring peace is when the tension started to go down.” 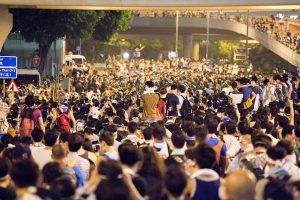 According to some of Handley’s contacts, the Church and her prayer could make all the difference as this situation develops.

“One of our key colleagues with Asian Access just so happens to be a believer who works within the current government,” Handley says. “His assessment is a key prayer request for those outside of Hong Kong. And that prayer request is this: ‘This is a huge opportunity for the Church. The Church could stand up in the midst of this crisis, and be the Bride of Christ or exhibit and model Christlike values in the midst of the situation. This is an opportunity for the church of Hong Kong to rise to the occasion.’”

Follow the story here with Asian Access so you know how to pray specifically and intentionally for the political discussion in Hong Kong.

You can also follow Asian Access as they work to develop new ministry efforts in Hong Kong’s business world.

“We are looking to launch Asian Access for Hong Kong working with key business leaders in this city,” Handley says. “There are business leaders at the highest levels of society, within the government, the big banks, high finance, and just about everywhere you can imagine.”