Japan breathes sigh of relief with Typhoon Roke's near miss

Typhoon Roke took a swipe at the disaster zone in Japan 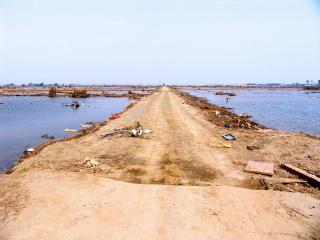 JAPAN (MNN) ― It also brought evacuations, flooding and more worry to the country struggling to recuperate from the tsunami, quake and nuclear disaster in March. Although a fierce storm, it weakened on approach to Fukushima as a Category 1 hurricane, before veering off. Japan’s government took no chances. Aside from evacuation orders, the weather agency issued warnings for landslides and flooding throughout the main island of Honshu, with high waves in coastal areas.

Joe Handley, president of Asian Access says their teams will continue to do what they've been doing in response to the crisis. They have a three-phase response they've implemented since the tsunami struck.  "The initial stages were just to get a feel for what was happening, provide immediate assistance as much as possible, and then to do a discovery process, finding out what the real needs were on the ground."

Cleanup began and ministry teams established a communications hub in order to developing resources that would mobilize Christians worldwide to help. Relationships have already been established, too. "One of the common stories that's being heard throughout the eastern part of Japan is from little kids, talking to their parents and grandparents when they see the aid workers coming. They've become so well known in their work, that you'll have little kids that say things like 'Grandma! Jesus is coming! Jesus has brought us food!'"

A2 also partnered with Churches Helping Churches, Billy Graham Association and Alpha/Japan in hosting "Oasis," a retreat for pastors and their spouses from the affected regions.

The second phase began this past summer. Handley says, "We're able to take in a number of requests for all the areas and find out strategic ways that we can come alongside the churches in providing for physical and spiritual relief in this hour." Roke's march may provide a setback in Phase Two growth, but that remains to be seen once the storm moves out of the area. IF the network of churches was well-grounded, it may bolster Phase One response.

Phase Three focuses on the future. "The place where Christ's name has not been very prominent all of a sudden is becoming quite the story. Churches are a key force for providing aid. We've come alongside these churches and helped equip them to be the centers for relief in their communities."

Asian Access/Japan is preparing to partner with churches across Japan to be the hands and feet of Jesus and develop a longer-term plan for holistic church multiplication. Within the next three to five years, Handley says, "There's a dream by the local churches and a plan that goes with those dreams to see over 1000 new churches planted in this region, all with the mindset of the holistic outreach center."

Handly goes on to explain that because the churches meet the needs of the community and have proven their commitment, doors are opening in ways never imagined. "This part of Japan is the single most unreached part of the country. So you have not only one of the largest unreached people groups in the world, but within that country and this people, you have the single largest area that has been somewhat neglected by the church."