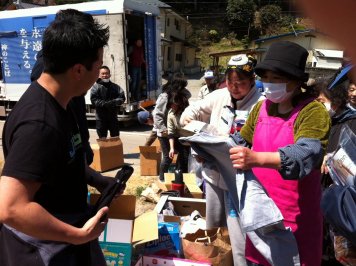 JAPAN (MNN) ―Two months after the tsunami and earthquake that devastated Japan, relief work is ongoing.

An Asian Access (A2) missionary says some areas have seen significant developments, including the restoration of electricity and shorter lines at the gas station.

But other regions have not been so lucky. A2's Kent Muhling says some are still without electricity and running water, and many remain in evacuation centers with no homes to return to.

Asian Access has a great deal of work in Japan and has been helping with relief where possible. Recently, Muhling and another A2 missionary joined a church in distributing aid from the back of a truck. They distributed goods to regions where neighborhoods are still in ruins.

In the midst of the ongoing sorrow, however, Asian Access has been able to preach the hope of Christ to many.

In a recent Facebook Note, Muhling reflected on an encounter with a woman whose life had been turned upside down in the tsunami. Interestingly, her kindergarten Bible had also shaken loose in the disaster and became the first thing the woman saw when she opened her storage shelves.

The woman was not a believer but agreed with Muhling that God may want her to read the Bible. Muhling was able to pray with her and share Christ's love.

In a separate account, a team member had a dream, or vision of sorts, of a particular man in a particular city. When A2 was working in that city, they came across a man just like the one the missionary had seen in his dream. They were able to share the Gospel with the man and provide him with food and a bicycle.

Relief work of the landscape and of the soul is slow going, but throughout Muhling's musings, he points out the purpose of it all:

"When one considers the magnitude of the disaster, handing out a truckful of supplies to only a few dozen people, having a five-minute conversation and a short prayer with one woman, or giving a man a coat, a bicycle, and sharing that 'Jesus loves you' may not seem like much. But to those few individuals, it had great impact."

You can help provide physical aid and spiritual sustenance for survivors of the Japan tsunami. Learn more about A2's work in that area here.