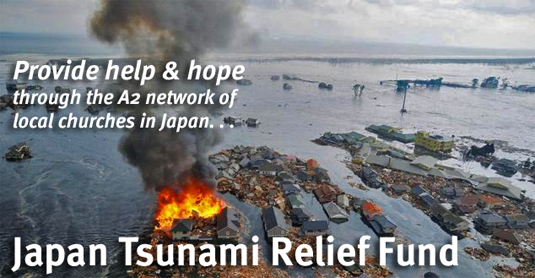 Damage assessments are just beginning, but some areas are so fragile that the assessors can't get close enough to investigate. It is clear, however, that the destruction will rise into the hundreds of billions of dollars.

For some of the survivors, rebuilding is far off in the future, and the immediate concerns involve restoring heat, electricity, running water, and finding shelter, food and communications.

Aid is most effective purchased from inside the country, but that often requires an established network for both getting the supplies and for distribution.

Asian Access has that ability. They've also received a $1,000,000 matching gift pledge to help meet the spiritual and physical needs of those who have been impacted the most.

This gift and the funds given to match the pledge will help them achieve their mission for Asian Access/Japan "to unite the church" and "extend the transforming power of the Gospel."

A2 is working with 400 pastors and 1800 churches--approximately 20-25% of the congregations in Japan--to help meet the spiritual and physical needs of several communities across the nation. They're also partnering with CRASH--a ministry of Grace Church which has grown into the largest Christian coordinating agency.

Details are still coming in, but A2 estimates nearly 300 churches were in the tsunami-impacted areas. They've launched a disaster response team for CRASH to set up a relief base in the affected areas. A few churches are already serving as shelters and are receiving those who have been left homeless.

If you can help, A2 has already set up a special Japan Tsunami Relief Fund. This will provide aid to hard-hit areas, delivered primarily through local churches. There may be no greater opportunity for the Gospel's advance in Japan than right now. Click here to learn more.