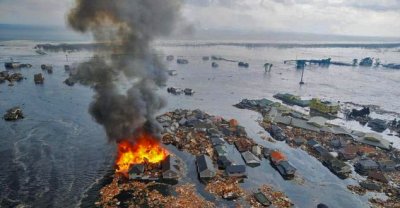 JAPAN (MNN) ―More than 300 churches exist in the area of Japan affected by Friday's tsunami. The status of most of them is unknown.

Asian Access missionaries, including Vice President to Japan Mary Jo Wilson and Pastor Hiroshi Kawasaki, were all gathered for an annual retreat at the time of the quake. All were safe during the disaster, and the timeliness of their gathering allowed them to put together a game plan.

Wilson says one of the first efforts has been to try and contact affected churches. "Asian Access works with [a network] of over 1,800 churches throughout Japan, so we've been trying to contact our partners and Kawasaki Sensei's network of churches. He's been on the phone constantly trying to see how people are--some are very close to where things are happening."

Kawasaki's family and congregants are within the quake zone, but are all safe. Other church bodies may not be so fortunate.

Kawasaki says communication has been difficult. Many wireless lines and landlines are down, making it near impossible to reach anyone by phone. Networking sites like Facebook and Twitter have been useful, but the internet has also been inconsistent. Roads are blocked off, so Kawasaki cannot get back to his own home, no less to any of the hundreds of affected churches.

One of the few churches they have been able to reach is just two miles from a nuclear power plant, and is being evacuated.

Thankfully, undamaged churches are determined to reach out as needs come in, and the needs are great. "310,000 (is what we're being told) people have lost their homes and right now are displaced. They're in community centers; we're aware of churches that have opened up and are housing people," explains Wilson. "Some other churches have opened up and are supplying some long-term temporary housing. So we see the body of Christ working together."

The needs currently are physical, but Kawasaki anticipates they will become much more spiritual as time goes by. "In this stage, they need some water and some food and some blankets also. But soon after, maybe they [will] need a very, very big spiritual help. So we are trying to prepare [so we can] help these people--a rescue mission."

Japan has been generally apathetic toward the Gospel in recent days. "More recently, Japanese people have not been so interested in spiritual things, it's more the economy and gathering material goods--that's been more the focus of their lives," says Wilson, translating a comment from Kawasaki.

Despite that, both Wilson and Kawasaki are confident that the scope of this disaster has shaken things up. Spiritual questions are certain to abound, even in a nation made up of less than one percent believers.

In light of that, "Pray that Japan experiences the reality of Christ's love."

Before spiritual needs can be met, physical needs must be addressed. Asian Access has set up a relief fund to help. Although the ministry is not a relief organization, they have the advantage of being on the ground, and will wisely allocate the funds to trustworthy aid organizations. Click here to help.