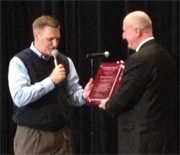 USA (MNN) ―A partnership is not only saving money and opening more ministry opportunities, but it's being rewarded. Over the weekend, Asian Access and SIM USA were presented an award for a strategic partnership at the Missio Nexus North American Leaders Conference in Chicago.

Asian Access had a problem. They had 24 missionaries in Japan, but they couldn't afford them. A2's President Joe Handley says, "We had an economy problem that was increasing over time. And we said, 'What are we going to do? Should we fold, or should we figure out a new way to do this?'"

That's when they sought out SIM USA to help. SIM has over 700 missionaries in over 65 countries. SIM USA president Bruce Johnson says, "Working together with others is just part of the fabric over decades of SIM. It was a natural conversation for us. It's part of our strategy. It's our heart."

It took some time, but SIM and Asian Access formed a partnership that will allow SIM to service and recruit missionaries for A2's work in Japan. What has it done? Handley says it's saved them a ton of money. "At least $300,000 minimum per year, plus--think of this: we go from one half-time recruiter to eight full-time recruiters just in the United States."

Johnson says they get a new field. "Together, we're trusting God that over the next 10, 15, 20 years we will help Japanese pastors and church plant 1,000 churches." He also hopes that as a result, these churches will send out 1,000 missionaries.

Johnson says this is a true partnership, not an acquisition. "Asian Access is the leader in Japan. SIM says, 'Your vision now becomes our vision.'"

Handley says the timing couldn't be any better: pastors in Japan are begging for missionaries in Japan. "We are desperate to send people to Japan, and we could not have done it on this scale before the beauty of this partnership with SIM."

Johnson says not just Caucasians, but all ethnicities can have a real impact in Japan.