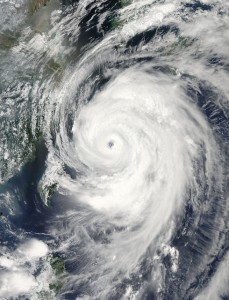 Neoguri (which means raccoon in Korean) left a destructive trail throughout the Okinawa island chain with strong winds, heavy rain, and large waves. Even so, Takeshi Takazawa with Asian Access says, “We are relieved even though 50,000 people in the city [were] all evacuated to the evacuation centers; 500,000 people have been warned to leave their house.”

The Japan Meteorological Agency said the storm could be one of the strongest to hit Japan in decades, with waves up to 46 feet high. Takazawa says, even for those who are used to weathering typhoons, “It’s very early to have this huge, strong typhoon around this season. Normally, it would be toward the latter part of the summer that we receive typhoons, but this is really early to receive this kind of typhoon.”

Plus, on Tuesday around 10pm local time, “In Hokkaido Island, which is the opposite side, northern island, we had quite a strong earthquake. People are wondering about the disaster happening, earthquake happening, typhoon.” The Japan Meteorological Agency noted the temblor was 3.0 magnitude, but it was enough to create fear, says Takazawa.

“People are wondering, ‘What’s happening to us? Things are not normal. We cannot bear any more natural disasters.’ That’s the concern people have.”

The nature of the storm plus the quake re-awakened recent painful memories. Takazawa says their leaders are ready to respond. “The triple disaster that happened in 2011 helped us to minister to the local people with both hands and hearts–words and deeds, together.” The obliteration of Japan that resulted from the quake, tsunami, and nuclear disaster provided opportunities unlike any before. In what was a closed society, “We could come alongside people who are struggling and provide aid, at the same time sharing the gospel of Jesus Christ.”

Hope became the mainstay for the work of Asian Access work throughout Japan. Disaster sometimes changes focus in ways that nothing else can. Takazawa says church leaders have a fixed focal point, but he asks that you pray for safety in the week ahead. Also, “Pray that the small Church of Japan will stand up, stand in the gap, and communicate the love of Christ in a devastating situation.”