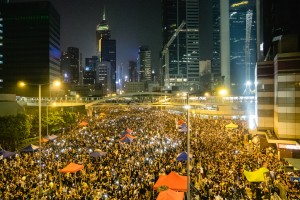 Protestors, upset over China’s involvement with a new CEO, have threatened to occupy government buildings. Then, they demanded the resignation of the chief executive.

So far, that’s meant preserving the existing legal system, civic rights, and maintaining a free press. However, China proposed that in 2017, Hong Kong’s voters would choose a chief executive…then they altered the deal a little more by stipulating a handful of candidates that must be approved by a pro-China committee. Asian Access President Joseph Handley says, “That has caused a stir amongst the people because they thought they had 50 years of free operation.”

Things escalated further when police attempted to disperse protestors with tear gas earlier in the week. Late Thursday night, officers were seen carrying in containers of rubber bullets, tear gas, and other riot control gear. “For the people of the city that have had some semblance of freedom for the last several years, their fears are taking them to the Tiananmen incident,” explains Handley. “They’re wondering, ‘What is this future going to hold for us?'” 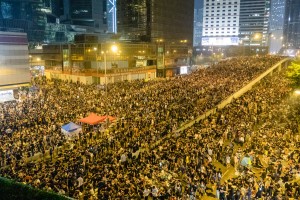 However, Handley notes, “Neither side is budging. In fact, the Beijing government says they’re not going to change their position. They’re holding strong, and they’re going to back the police as well as the current CEO. The student protestors and others on the streets that have joined them say they’re not going to back down either.” Meanwhile, Hong Kong’s chief executive refused to resign but offered to appoint a top official to hold talks with student leaders.

The olive branch is a gesture of good faith. China was in the background issuing dire warnings should protestors actually try to occupy the government buildings.

“In this situation, I think the future will depend a lot on how leaders handle themselves,” says Handley. They’re watching events unfold with piqued interest because “that’s what Asian Access is trying to address: to come in and lead where the Church is growing like wildfire. There are Kingdom leaders who are hungry for this type of training and development.”

So, just how are the protests and Asian Access connected? They’re not, exactly. They’re linked only by the fact that A2 has been laying the groundwork to begin training in Hong Kong. Handley says how the unrest is handled outlines the need for leadership development. “Every time you hit something like this, it’s leadership that’s going to guide the way forward.”

In fact, through the Marketplace Initiative, says Handley, “As you invest in the lives of key leaders, they influence others. So, this young generation of protestors, if they have the right people mentoring and discipling and encouraging them, they will be well prepared to lead in the midst of these kinds of challenging or chaotic situations.”

A2 equips and trains Church leaders for multiplication. It not only works in an evangelistic framework, it’s sound business theory. Peter Zhao, a renowned economist from China, told Handley, “This is exactly what Asia needs today. An Asian Access for marketplace leaders!” 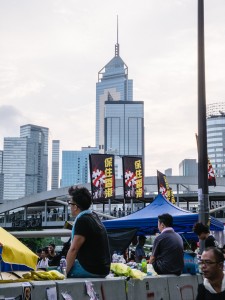 Handley says business leaders are eager for the leadership training model: “I’m going to Hong Kong in December for an intense day with several key leaders to talk about opening that country for Marketplace Leaders. So you can pray for Asian Access as we enter that space.”

There’s a lot at stake over the next few days. Nobody wants the shadow of Tiananmen in Hong Kong. It took six weeks for that tragedy to unfold in Beijing 25 years ago. The next five weeks will be crucial for Hong Kong. “Pray for these leaders, that God would give them wisdom and discernment to handle things well. Pray for the Beijing government and for the current Hong Kong governors, that they would lead well, and in a way, that would bring peace to their society.”

Listen to the broadcast (story #1)