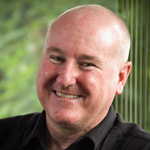 Rev. Joseph W Handley, Jr. is currently president of Asian Access and serves ex-officio on the Board of Directors.

Joe was born and raised in Southern California. He attended Azusa Pacific University where he earned a B.A. in psychology and an M.A. in Theology. Joe served nine years at Azusa Pacific University where he was the founding director of their Office of World Missions and leader of one of the first multi-national high school mission congresses in Mexico City in 1996. The Lord then called him to Rolling Hills Covenant Church in 1998 where Joe served as the Global Outreach Pastor and later the Associate Pastor for Outreach Ministries. In July of 2008, Joe answered the call of God to become the fourth president of Asian Access, a leader development movement that began in 1967.

Joe strives to develop leaders for missional movements across Asia. His passion is to come alongside local leaders to encourage and empower them in their calling to reach the world for Christ.

In addition to his role as president of Asian Access, Joe is a contributing blogger for the Billy Graham Center’s Gospel Life Blog. He is also the senior advisor for leader development with the International Orality Network. He serves on the advisory teams for ELEVATE, BiblicalTraining.org, and DualReach. Joe is currently pursuing a Ph.D. in Intercultural Studies at Fuller Theological Seminary.

Joe met Silk while students at Azusa Pacific University. They married in 1990 and are presently living in Tokyo, Japan. The Handleys have three grown children: Becca who is married to Lowell, Rachel who is engaged to Quan, and John who is attending Merton College at Oxford University reading Politics, Philosophy and Economics as an undergraduate student.

Asian Access (A2) is a vibrant community that changes the few who change the many. We are an interdenominational movement working throughout Asia to identify, develop and release leaders of missional movements. We're focused on empowering key leaders who will lead the Church with vision, character and competence. We are becoming a vibrant community of leaders in twenty countries of Asia, who will unite the Church, extend the Kingdom, and transform the cultures of Asia for the glory of God.